A Kwara state-based Civil Society Organization, Elites Network for Sustainable Development (ENetSuD), has again called on the Kwara State Government to prioritize funding of Education in the State even at the period of financial constraint. ENetSuD had, through a series of press releases on the poor condition of schools in Kwara State, berated the State Government over its negligence to the deplorable condition of educational infrastructure across the state. (Read:https://enetsud.org/2018/09/15/poor-state-of-public-schools-in-kwara-state-enetsud-tasks-state-government-on-adequate-funding-of-education-and-ensuring-its-judicious-use-by-school-managements/, https://enetsud.org/2018/07/24/government-technical-college-patigi-a-shadow-of-its-old-self/, and https://enetsud.org/2018/06/29/islamiya-college-patigi-a-school-where-students-learn-in-uncompleted-buildings-with-no-facilities/).

Dr. Alagbonsi Abdullateef, the Coordinator of the group, in a statement released on Saturday November 3, emphasized the need for the state government to urgently access the UBEC matching grant still available to the state, arguing that the state government’s lack of commitment towards providing conducive learning environment for children in the state, has resulted in monumental decay in education infrastructure in the state.

“we launched #FundKwaraEducation campaign and examined substantial number of schools in the 3 senatorial districts of the State. We took pictures and videos of the current condition of many schools we visited, and made a documentary of them. We have called the Kwara State Government attention to the pitiable condition of many public schools in the state oftentimes, so that a state of emergency on Kwara education can be declared by the State Government. We referred the State Government to the Five Billion, One Hundred and Thirty Nine Million, Nine Hundred and Eighty Thousand, Four Hundred and Ninety Six Naira (N5,139,980,496.14) UBEC Matching grant that had not been accessed by it as at 11th September, 2018. We argued that, if this money is accessed by Kwara State Government, the current poor educational infrastructure could be adequately fixed to improve the state of education in the state”.

“Reacting to our queries, the State Government disclosed that the drop in the Federal Allocation coming to Kwara had made it impossible for the state to Access the UBEC Matching grant that is meant for the funding of Basic School Infrastructures. Our fact check with UBEC (which was also corroborated by the SSA Media and Communication to the Governor of Kwara State) shows that Kwara state has not accessed the UBEC Matching grant since 2013.|

“From our findings we also observed that ebbing appropriation is not the major problem associated with poor School infrastructure in the state but also lack of diligent prioritizing by the Kwara State government. For instance, the sum of Two Billion, Eight Hundred and Seventy One Million, One Hundred and Twenty One Thousand, One Hundred and Twenty One Naira (N2,871,121,121) and Two Billion, Six Hundred and Thirty One Million, Sixty Three Thousand, Three Hundred and Ninety Eight Naira (N2,631,063,398) were respectively approved as the estimate for the State Counterpart Fund to access the UBEC Grant in the 2017 and 2018 Appropriation Law (Approved Budget), but these sum had not been released to access the accumulated funds since 2013, leaving the School infrastructure across Kwara State in shambles.” 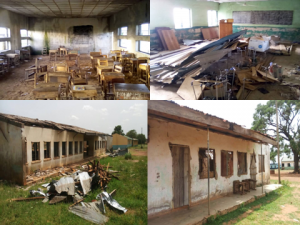 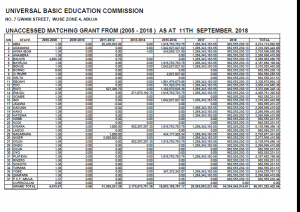 The coordinator of the group, Dr. Abdulateef Alagbonsi, further described as untenable, the state government’s excuse of dwindling federal allocation as the reason for not accessing the UBEC grant.

“In order to evaluate the excuse given by the State Government for not accessing the fund, we made a comparison of the State Total Revenue from 2012 (the last time that the grant was accessed by Kwara State) till date. Our thorough analysis of the figures shows that there is no obvious reason not to have accessed it in 2013 (which had the highest revenue). Moreover, there was no significant difference between the revenue of 2012 and 2014. At least, before the drastic drop of revenues by 2015, the State Government ought to have accessed the grant of 2013 and 2014 if it had prioritized the Funding of Educational Sector in the State. Though the revenues in 2015 and 2016 were comparably low, it is interesting to note that 2017 revenue substantially improved, and we are of the conviction that there will be significant improvement by the end of 2018. We expect that a government that prioritizes education will not find it difficult to make monthly savings of small amount that will aggregate to a substantial amount over the year to pay the counterpart fund and access the UBEC Grant.”

“We are aware of the fact that there are many expenses that government has to make from the little resources available. We also acknowledge the fact that Education is not the only sector in the economy that needs funding. It is sad to note that 24 states in Nigeria have not been able to access UBEC matching grant due to their financial constraint. In the light of this, we have joined the call to the Federal Government to review the UBEC Act and reduce the percentage of the State Counterpart Fund from the current 50% to a percentage that will be agreed upon and affordable by the States in Nigeria. However, since the Federal Government is yet to do this, immediate solution to the current shameful state of our basic education must be provided. Out of the limited resources available with the Kwara State Government, we are urging her to immediately make provision for the Counterpart fund to access the matching grant with UBEC, so as to urgently fix the School infrastructure across Kwara State.”

“According to Femi Falana, SAN “countries are run on Tax and we must go back to era of running the country on the basis of tax”. Considering the unique importance of Internally Generated Revenue to the economic viability of a state (especially in the era of unstable Federal Allocation), responsible and patriotic citizens are expected to play their role in growing the economy by paying their taxes regularly. While commending the Administration of Alh. Abdulfatah Ahmed on the effective taxation system towards boosting the revenue base of the state, we are also encouraging the Kwara State Internal Revenue Service to improve their citizens-friendly tax mechanism and provide values for the tax-payers money.”

“Due to the unique importance of Education to this world, adequate funding of education must be prioritized by everyone, particularly the government. As a result of our disappointment with how the appropriated sums for Education Funds in the successive budgets since 2013 have not been released by the State Government, we are calling on the Kwara State House of Assembly to urgently look into making a law that will statutorily set aside a percentage of the State Annual Consolidated revenue to Fund Education, the way it has commendable done so for the State Health Insurance Scheme. This will provide a lasting solution to the poor funding of education in the state.”

“We are highly pleased with the Federal Government disclosure to pay N71,292,316,082.84 billion directly to UBEC as the outstanding counterpart fund of States. In a statement made available by the Executuve Secretary of UBEC in an interview with News Agency of Nigeria on 2nd November, 2018 in Abuja, he disclosed that Federal Government will deduct the entire outstanding counterpart fund of all States from their Paris Club Refund account. He concluded that the issue of funds not accessed in UBEC by states will soon come to an end at least for 2018.

We commend the Federal Government for this form of bail out to the state, which will enable them to get the UBEC Matching grants and fix the School infrastructures that are already dilapidated and improve the standard of Basic education across the country. This FG initiative to assist the States in accessing the grants is very timely, especially at a time that they are complaining of dwindling revenue and inability to pay for the counterpart fund. We call on states, particularly Kwara State government, to use the money for the improvement of the infrastructure of schools across Kwara state, which is the purpose that it is meant for.”