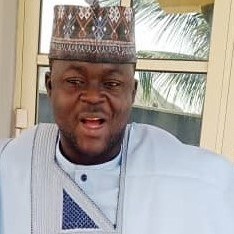 He is married with 3 kids - one boy and two girls.

HeI attended both primary and secondary school education in LGEA Nyamikpan and Patigi Secondary school between 1994 to 1999 and 2000 to 2005 respectively.

He proceeded to Kwara State College of Education Lafiagi in 2007 and obtained Nigeria Certificate in Education (NCE) in Physic / Computer in the year 2009.

He later proceeded to Kebbi State University of Science and Technology Aliero where he obtained his BSc Physics.

He was appointed by the Kwara State Universal Basic Education (SUBEB) in the year 2011 and presently working has a per - time lecture at Etsu Ibrahim chatta College of Health Science and Technology, Patigi, Kwara State.

He belongs to many developmental groups in Patigi and Kwara at large where he has served in many capacities, including Member of Patigi Emirate Development Union (PEDU); Director of investigation 1 Patigi Progressive Minded Youth; Patigi Municipal Forum (PMF).