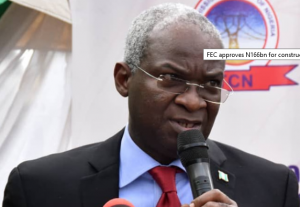 The Federal Ministry of Works and Housing has responded to the petition ENetSuD/FOI/2018/FGP/01/32 written by ENetSuD on 3rd September, 2019 against Dromo International Company Limited over poor execution of Share-Patigi road (https://enetsud.org/2019/09/05/share-patigi-road-enetsud-drags-contractor-to-supervising-ministry/). The Ministry appreciated ENetSuD effort and concern to ensure that there is value for money in terms of quality delivery of government-funded projects, including Share-Patigi road, in the interest of the public. The Ministry also told ENetSuD that it has directed the Contractor to move to the failed locations on the rehabilitated parts and remedy the failures so as to prevent the road from deterioration.

In the response of the Ministry FCW/KWS/H/98/Vol.II/38 dated 12th September, 2019 and signed by the Federal Controller of Works/ER (Engr. Atitebi Wasiu K.), the Ministry recalled that it awarded rehabilitation of 100km Share-Patigi road to Messrs. Dromo International Company Limited at the contract sum of ₦10,298,833,020, who has has achieved almost 13km pavement work up to asphaltic concrete binder layer. The Ministry also explained the project’s scope of work to include: laying of naturally occurring lateritic material as subbase, laying of naturally occurring lateritic material as base, laying of asphaltic concrete binder and asphaltic concrete wearing course, among others.

Explaining why many segments of the project failed as noted in the ENetSuD petition, the Ministry highlighted some completely missing/omitted and other inadequate provisions in the Bill of Engineering Measurement and Evaluation (BEME) of the project, which has necessitated complete appraisal of the BEME. Some of the omitted items were reported by the Ministry to include culverts, demolition of existing concrete structures, HT reinforcements, reinstatement of numerous massive washouts and deep gullies, trapezoidal drains, subsoil drains, and concrete chute at high at high embankment. The Ministry also listed the grossly inadequate provisions in the BEME to include: site clearing, filling, removal, and replacement of unsuitable materials, scarification (earthworks) of existing road and construction of lined drains (U). The Ministry, however, pointed out that the Contractor has executed some of these missing items on site, and is yet to claim for them as they are omitted in the BEME.

The Federal Controller of Works also explained to ENetSuD that the above-listed omitted items account for failures observed by ENetSuD in most part of the road. For instance, the observed water crossing the road and sand deposit on carriageway at Ch.53+150 (Gada village) and Ch.62+672 (Kusonguba village) respectively were deliberately gapped until approval for provision of required culverts is obtained; the observed failures at Ch.53+150 (Gada village) and Ch.56+600 (before Latan Woro Village) was due to the omission of trapezoidal drains necessary for efficient control of run-off along the road corridor; the observed flow of underground water at the road side at Ch.55+980 to Ch.56+080 was due to omission of subsoil drains necessary at some marshy locations along the alignment, among others.

The Federal Controller of Works, while making further clarifications on the Ministry’s efforts to ensure quality project execution, said that several efforts have been made since the commencement of the project to cater for these shortfalls and omitted items of works, which include submission of request for project augmentation and submission of Revised BEME where all the missing items will be captured.

Engr. Atitebi assured ENetSuD that it will continue to enforce strict compliance to the Ministry’s specifications and ensure that all necessary approvals and interventions which are required for the successful delivery of the project are obtained and implemented. He also urged ENetSuD to always seek for facts and clarification on similar issues from the field office in Kwara State before its conclusion in the future.