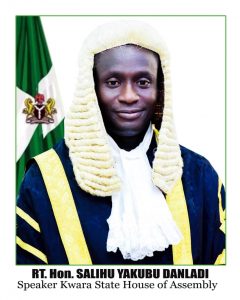 Elites Network for Sustainable Development (ENetSuD), a Kwara-based Civil Society Organization monitoring how public funds are spent, have written the Kwara State House of Assembly over the Assembly’s inaction on the amendment of Kwara State Freedom of Information (FOI) Bill 2019 requested by the Executive Governor of Kwara State, Alhaji Abdulrahman Abdulrazaq, before he could assent to the bill.

In a letter jointly signed by its Coordinator (Dr. Alagbonsi Abdullateef) and General Secretary (Mahmud Usman Baba) and submitted to the Rt. Hon. Speaker of the Assembly (Rt. Hon. Salihu Yakubu Danladi) on 11th September, 2019, ENetSuD reminded the Assembly about the legislative journey of the Bill. The first paragraph of the letter reads “Kwara State Freedom of Information (FOI) Bill 2019 was passed by the 8th Kwara State House of Assembly (KWHA) on 30th May, 2019 and transmitted to the Executive Governor of Kwara State (Alhaji Abdulrahman Abdulrazaq) on 20th June, 2019 for his Assent. In a letter read by the Rt. Hon. Speaker at the plenary on 23rd July, 2019, the Governor gave his highly positive and fascinating feedback to KWHA and requested for minor amendment of sections 4, 5(1), 6 and 10 before his assent to the Bill. The Rt. Hon. Speaker took a right step by immediately referring the Bill to House Committee on Information, Youth, Sport, Culture & Tourism and House Committee on Ethics, Privileges & Judiciary for the amendment requested by the Governor”.

In the second paragraph of the letter, ENetSuD registered its concern over the Assembly’s delay in amending the Bill and sought convincing clarification. “Mr Speaker Sir, as a Kwara-based Civil Society Organization that strongly believes in Transparency and Accountability as the bedrock of good governance, we wish to register our concern over the Assembly’s delay in the amendment of the Bill, which has been preventing the Governor’s assent. Why the minor amendment requested by the Governor has not been done after 50 days is not understood by the general public and needs convincing clarification”, ENetSuD told the Speaker of the House.

In the third paragraph, ENetSuD alleges that the 9th Assembly has always been giving prompt attention to all other executive requests except the FOI Bill, which shows the Assembly’s little or no priority for the Bill. “Mr Speaker Sir, it is on record that the 9th KWHA under your able leadership has been meticulously handling all the Governor’s requests (except amendment of FOI Bill) without any delay. It is also important to state that other executive requests given priority by the 9th Assembly are undoubtedly important in the public interest. However, the FOI Bill that will make public records and information more freely available, provide for public access to public records and information, protect public records and information to the extent consistent with the public interest and the protection of personal privacy, protect serving public officers from adverse consequences of disclosing certain kinds of official information without authorization and establish procedures for the achievement of those purposes and for related matters, is of equal importance as others given priority by the Assembly. We are of the strong conviction that the delay in amendment of FOI Bill requested by the Governor is due to little or no priority given to the Bill by the Assembly under your leadership”, ENetSuD noted.

In the forth paragraph, ENetSuD pointed out the impacts of its #FollowKwaraMoney activities in tracking Federal Government projects in Kwara State using the FOI Act and expressed the difficulty it has been facing in tracking Kwara State and Local Governments budgets. “Mr Speaker Sir, you may wish to be reminded that our #FollowKwaraMoney activities have been extensively monitoring and tracking the Federal Government (FG) Capital and Constituency projects in Kwara State since 2017, which have been ensuring that public funds work for the people. The tracking of FG-funded projects has been possible for us because of the Freedom of Information (FOI) Act 2011, which we have effectively been using to promote Transparency and Accountability on spending of Kwara-related funds from FG. However, tracking of projects funded by Kwara State and Local Governments have been difficult due to the fact that the FOI Act has not been domesticated in the State”, ENetSuD added.

In the fifth paragraph, ENetSuD recalled the inauguration speech of His Excellency Abdulrahman Abdulrazaq dated 29th May 2019 “What we have lacked before now are dependable and sustainable development plans, credible policies and policy discipline, accountability and transparency, a good sense of social justice and ability to expand social and political spaces that will promote tolerance, equality and innovation. These are areas where our government will make a difference”. ENetSuD also told the Speaker that “the delay in amendment of the Bill is turning the current administration’s promise of Transparency and Accountability to a mirage”.

A copy of the letter was submitted to the Executive Governor of Kwara State (Alhaji Abdulrahman Abdulrazaq), Director of Department of State Services, and the Kwara State Commissioner of Police.