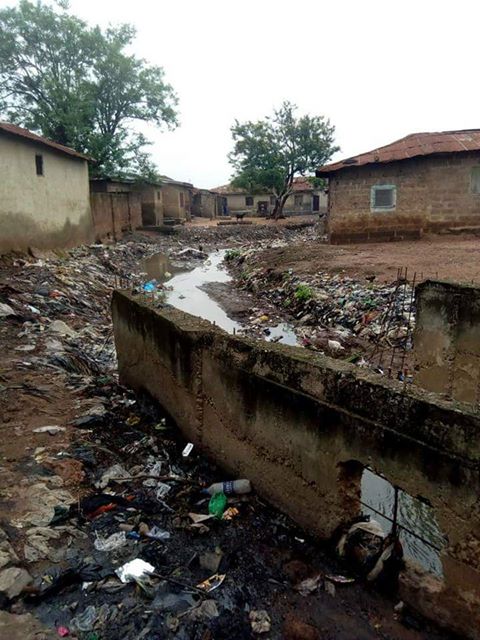 Elites Network for Sustainable Development (ENetSuD), a Kwara-based Civil Society Organization, has dragged the Federal Ministry of Environment and BUAN Projects Limited (the Contractor) to Economic and Financial Crimes Commission (EFCC) over execution of Oja Gboro drainage project that does not commensurate with the fund released and approved project specifications.

In a Petition ENetSuD/EFCC/01/05 submitted to the Ilorin Zonal Office of EFCC on 4th September, 2019 and signed by its Coordinator (Dr. Alagbonsi Abdullateef), ENetSuD explained that “construction of drainage and erosion control at Ita Elepa in Oja Gboro, Ilorin East local government area of Kwara Central was facilitated by Sen. Abubakar Bukola Saraki as Zonal Intervention (Constituency) Project in the 2017 Federal Government budget. Additional parts of the project were also captured in the 2018 and 2019 Federal Government budget as ongoing, and a sum of One Hundred Million naira (₦100,000,000) was appropriated in each of the years to be executed by Federal Ministry of Agriculture and Rural Development (FMARD), making additional Two Hundred Million naira (₦200,000,000) as budgeted amount for its continuation in these years. Residents of the community complained to ENetSuD about persistent erosion problem during rainy season, leading to serious environmental problem with public health implications”.

ENetSuD further stated that “as a Kwara-based Civil Society Organization (CSO) monitoring how public funds are spent through its #FollowKwaraMoney initiative, we wrote series of Freedom of Information (FOI) letters to the Ministry of Environment who executed the 2017 part of the project to request for the financial and technical details of the project. In addition to the correspondences exchanged with the Ministry, ENetSuD Directorate of Investigation and Public Petition (through its Technical and Evaluation committee) also visited the project site to do technical re-assessment and re-measurement, so as to compare the details provided by the Ministry with what is actually executed on site. Due to our knowledge of the fact that nothing has been done on the site by FMARD based on 2018 appropriation, and that 2019 budget implementation is yet to commence as at the time of writing this petition, the focus of our petition is on the 2017 part executed by the Federal Ministry of Environment only, as that is what could be presently found on the project site”.

Giving details of its findings to EFCC, ENetSuD said “our re-assessment was based on Bill 3 only (which is physically assessable on site), as Bills 1 and 2 are provisional and are not assessable after completion. We found that the total money paid to the Contractor is questionable considering the work done on the project site, as our re-assessment and verification of Bill 3 disagree with the reality met on the project site (Table 1 below shows the Quantity and the Amount generated using the same official Rate in the BEME provided to us by the Ministry).

Continuing, ENetSuD said “it is worthy of note that out of the 2 access slabs found on the site, the steps of one of them are made of concrete, while the steps of the other slab are made of blocks. Thus, table 2 below shows the Quantity and the Amount of the block works generated by ENetSuD using an estimated Rate obtainable from other Federal Government-funded projects (as there is no block work in the BEME approved by Ministry of Environment for the project under consideration). Adding ₦161,664 for the concrete steps of slab actually done on site (item 3.07 of table 1) to the ₦68,000 for the block work of the steps in the second slab (used to complement the concrete work as in table 2) gives ₦229,664 as the total cost of item 3.07 in table 1 as estimated by ENetSuD instead of ₦3,192,864 claimed by the Ministry. Thus, the value of structures physically found on site based on bill 3 is ₦18,312,416 (as derived from addition of ₦18,244,416 in table 1 and ₦68,000 in table 2) instead of ₦61,896,640 claimed by the Ministry”.

Concluding its petition, ENetSuD said “due to the fact that some structures (pedestrian bridge, stone pitch and rip-rap) provided for in Bill 3 were not found on site, and the cost ENetSuD arrived at for the available structures as per Bill 3 is ₦18,312,416 instead of ₦61,896,640 stated by the Ministry; the costs of other Bills 1 and 2 that could not be assessed are also questionable. How the contractor was certified for payment of ₦85,766,298 despite the non-commensurate work on the site is not understood and needs further investigation. Therefore, all the components of the BEME should be revisited in relation to the executed works on the site, as we are of the conviction that the project execution is a waste of public fund that has neither served its well-intended purpose nor added much value to the subsisting erosion and flooding in the community, in addition to the gross inflation of contract sum”.

ENetSuD prayed to EFCC to investigate the non-execution of the project in compliance with the BEME, overpayment of the contractor by the Ministry relative to work done, and the resulting inflation of contract sum; prosecute the offenders based on your investigation; return the contractor to site to utilize all the money received for commensurate project execution; and do such other things you consider necessary to ensure that Kwara money works for Kwarans.