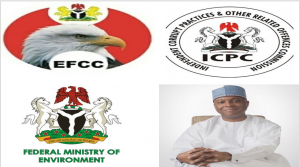 In the petition signed by its Coordinator (Dr. Alagbonsi Abdullateef), addressed to ICPC Chairman, and submitted on 6th June, 2019, ENetSuD stated that “residents of the community complained to her about persistent erosion problem in the area leading to non-conducive learning environment for students, disruption of vital school activities, and spread of diseases in the area. As a Kwara-based CSO monitoring how public funds are spent through her #FollowKwaraMoney initiative, ENetSuD wrote series of Freedom of Information (FOI) letters to the Federal Ministry of Environment who executed the project to request for the financial and technical details of the project”.

Responding to ENetSuD’s letter, the Ministry provided the Interim Payment Certificate, the Engineering Drawings and the Bill of Engineering Measurement and Evaluation (BEME) which has 3 components: Preliminary and General (Bill no 1), Site Clearing/Earthworks and Rehabilitation Works (Bill no 2) and Concrete Works (Bill no 3). In addition, the project contract sum (excluding 5% VAT) as derived from the addition of the 3 components in the BEME is ₦45,238,095; the project was awarded to Mash Construction Company Ltd (Wuye District, Abuja) on 27th December, 2017 who was paid ₦41,003,131 (excluding 5% VAT) by the Ministry; and the project was 95% completed”, the Ministry said.

In the concluding part of the petition, ENetSuD stated that “the sub-total amount for project bills (excluding 5% VAT) is ₦45,238,095.2, which includes Bill 1 (₦3,600,000), Bill 2 (₦9,480,000) and Bill 3 (₦32,158,095.2). Due to the fact that many structures provided for in Bill 3 were not found on site, and the cost ENetSuD arrived at for the available structures as per Bill 3 is ₦4,891,275.6 instead of ₦32,158,095.2 stated by the Ministry; the costs of other Bills 1 and 2 that could not be assessed are also questionable. How the contractor was paid ₦41,003,131 despite the non-commensurate work on the site is not understood and needs further investigation. Therefore, all the components of the BEME should be revisited in relation to the executed works on the site, as we are of the conviction that the project execution is a waste of public fund that has neither served its purpose nor added value to the subsisting erosion and flooding in the community, in addition to the gross inflation of contract sum.

ENetSuD therefore charged the Chairman of ICPC to further investigate the poor execution of the project and its payment inflation and publish findings from ICPC, while also requesting him to do such other things he considers necessary to ensure that Kwara money works for Kwarans. ENetSuD also disclosed that a copy of the petition will be submitted to the Ilorin Zonal Office of Economic and Financial Crimes Commission (EFCC).