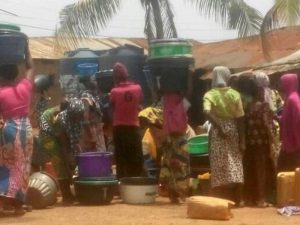 The Elites Network for Sustainable Development (ENetSuD), a Kwara-based Civil Society Organization, has again described the multi-billion naira Ilorin Water Reticulation Project as not having value for Kwara tax-payers money. The CSO, through its press statement on 2nd July 2018, had previous described the project as a scam (https://enetsud.org/2018/07/02/where-is-the-water-kwarans-ask-governor-ahmed/).

In a statement signed by the Coordinator of the Organization, Dr. Abdullateef Alagbonsi, ENetSuD said that as part of its #FollowKwaraMoney project, it wrote Kwara State Governor on 12th September, 2018 to request for the following specific information on the Water Reticulation Project: (i) Breakdown of the money spent and the proposed further expenses on Ilorin water reticulation project since its commencement till completion, (ii) the phases of the project and the time frame for their execution (including the completed, ongoing and future phases), (iii) the particular locations in Ilorin that the project is expected to serve after its completion, and (iv) the exact period that the residents and indigenes of Ilorin should be expecting its completion so that they can begin to enjoy uninterrupted water supply as promised.

Furthermore, Dr. Alagbonsi stated that the Government responded on 19th October, 2018 and extensively explained the efforts it has been making to solve water problem in the State. It also disclosed that 6.5 Billion naira has been spent on the Primary and Secondary phases, while the Tertiary phase has been appropriated in the 2018 budget. Subsequently, the Government commissioned this Water project on 22nd November, 2018 and provided lists of areas where the completed water projects were located. Till date, our question concerning the breakdown of the money spent on this project remained unanswered by Kwara State Government.

In order to ascertain the presence of the water projects in the locations listed by Government, and to also know if these tax-funded projects are working for the Citizens of Kwara State, our Directorate of Investigation and Public Petition visited the locations listed by Government to interview residents on the projects. To our dismay, residents in some of the places visited falsified government’s claim by saying that the water project is not available in their places and neighborhood. In most of the places where it was found, the water project was not working since the first day of erecting it. Only in few places were the water found to be working

LISTEN TO THE INVESTIGATION INTERVIEW HERE

Ilorin water reticulation project, which is meant to make water available to the nooks and crannies of Ilorin metropolis, is one of the major projects inherited by the current administration of Alhaji Abdulfatai Ahmed from his predecessor, Dr. Abubakar Bukola Saraki. It involves water distribution network that will provide water routes to the consumers after it has been collected and treated. Being the capital city of Kwara state, Ilorin continues to expand on daily basis and the need to expand the water radius becomes very inevitable. The project started in year 2009 and has remained one of the most controversial projects since that time. It has gulped several billions of naira since almost a decade that it commenced but it’s sad that the light has not been sighted at any end of the tunnel. The project, which was reported to have been 98% completed in 2014 by Mr. Yomi Ogunsola, the then Senior Special Assistant to Governor Abdulfatah Ahmed on Investment Promotion and Strategy, took the Kwara State Government more than 4 years to complete the remaining 2%.