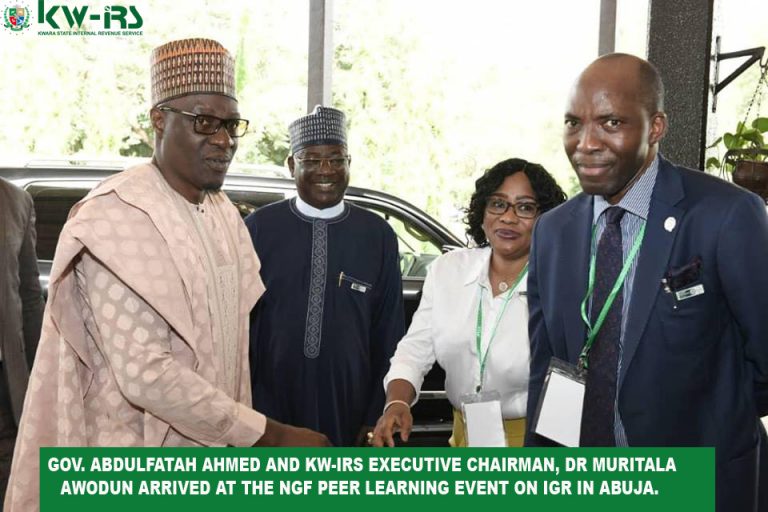 November 9, 2018 Written by Sheriff Quadry. Posted in Uncategorized No Comments

Elites Network for Sustainable Development (ENetSuD), a Kwara-based Civil Society Organization, has lauded Kwara State Government (KWSG) on its improved reform that led to an increased Internally Generated Revenue (IGR) in the State. In a statement signed by its Coordinator (Dr. Alagbonsi Abdullateef) and made available to Journalists, ENetSuD stated that “IGR of Kwara State has commendably improved in recent times, which had greatly contributed to the total revenue of the state and has been sustaining it, especially at the period of dwindling FAAC allocation. Year-by-year analysis of the Total revenue of Kwara state since 2012 showed a significant decline since 2015, which could be related to the dwindling FAAC allocation caused by recession and oil price.

Interestingly, FAAC has been gradually increasing since 2016 (though below pre-recession periods like 2013 and 2014), and there is a possibility that the total revenue at the end of 2018 will equate or even surpass that of 2013, considering the fact that the monthly net FAAC to Kwara state has averagely remained around 3.5 billion since December 2017” (Figures 1 and 2). 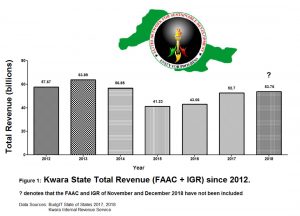 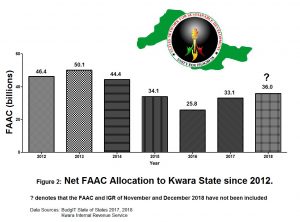 The KWSG, in its efforts to increase and diversify its revenue base for financial freedom and bolster efficacy in governance, signed the Kwara State Revenue Administration Law (Law No. 6 of 2015) on 22nd June 2015, which made the old Board of Internal Revenue defunct and gave birth to the current Kwara State Internal Revenue Service (KW-IRS). The current KW-IRS has significantly increased the State IGR compared to the periods that precede its formation. The impact of the current system of IGR in Kwara is evident from the percentage contribution of IGR to the annual total revenue in the state. For instance, between 2012 and 2015 when KW-IRS was formed, 2014 was the year with the highest percentage contribution of IGR to the total revenue of the state (22%), followed by 2013 (21.6%), while 2015 has the lowest (17.4%). However, it is interesting to note that IGR has significantly contributed to the total revenue of the state since 2016. Specifically, the contributions of IGR to the State revenue in 2016 (40.1%), 2017 (37.2%) and 2018 (33.0%) are comparably higher than the years that precedes the creation of KW-IRS, even though the dwindling FAAC since 2016 could be an important confounder (Figure 3). 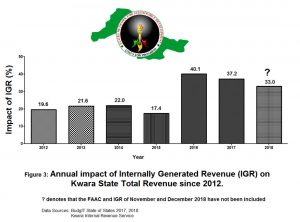 Considering the unique importance of IGR to the economic viability of a state (especially in the era of unstable FAAC Allocation), responsible and patriotic citizens are expected to play their role in growing the economy by paying their taxes regularly. We are appealing to the citizens and residents of Kwara State to pay their taxes accordingly. While commending the Administration of Alh. Abdulfatah Ahmed on the effective taxation system towards boosting the revenue base of the state, we are also encouraging the KW-IRS to improve its citizens-friendly tax mechanism. We are of the conviction that Kwarans will voluntarily continue to cooperate with Government on payment of taxes if the State Infrastructural Development commensurate with the taxes that are being paid. We therefore urge the KWSG to provide value for the tax-payers money.

Many aspects of the economy in the state, including Education, Health, Road infrastructure, Environment, etc, need urgent attention of KWSG. For instance, we have repeatedly called the attention of KWSG to the pitiable condition of school infrastructure across the state. Many of the school buildings are dilapidated, and need urgent attention of the government. On health, the creation of State Health Insurance Scheme, and the commitment of 1% of the State Annual Consolidated Revenue Fund to the Scheme is commendable. However, the sector needs improvement in terms of manpower and facilities. The uncountable numbers of bad roads in the state also need the quick intervention of the government within the limit of the available resources.

Advising the KWSG on the need to improve IGR outside tax payment by citizens is of interest to us. The government should explore all the possible ways to attract investors to Kwara state, which will boost its economy. Investing in the agricultural sector to diversify the economy is also sacrosanct. While the practice of removing 500 million naira monthly as Kwara Infrastructure Development Fund (IF-K) from the IGR is good, KWSG is again urged to be prudent in spending, and make more savings from the available resources.