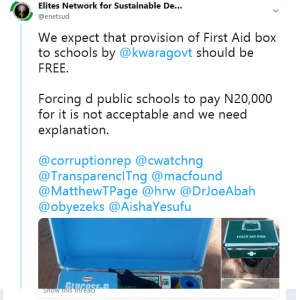 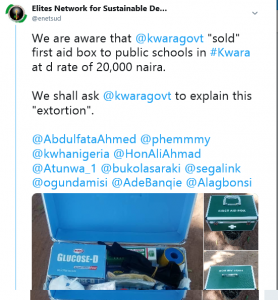 When asked the for the allegation evidence by its followers on Twitter, ENetSuD said that “Receipt for the payment were given to principals and headmasters of schools, but we shall not share such receipt so as to protect the school management from being punished by KWSG. How can KWSG that is warning public schools against illegal collection of fees from students also be exploiting the schools? Are the public schools learning this exploitation from KWSG? This is shameful!” Commenting further, the Coordinator of ENetSuD (Dr. Alagbonsi Abdullateef) further said through his Twitter handle that “We are aware of schools outside Ilorin that paid N22,000 for the box instead of N20,000. Though N20,000 receipt was issued, the remaining N2,000 was not documented”. 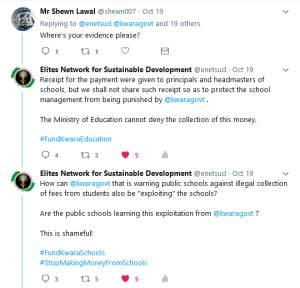 Not satisfied with the explanation of ENetSuD, Owolabi Adebayo, who is a correspondence with Kwara State Government-owned Herald Newspaper, insisted that ENetSuD story is a propaganda until evidence is presented. Furthermore, the Senior Special Assistant to the Kwara State Governor on Media and Communication, Dr. Muideen Akorede, who is also the official Spokeman of the Government, responded to ENetSuD query and falsified the allegation. He said “This is false informant. No school was asked to pay to get first aid kit. Kwara State Government is not in the habit of charging its schools for services. We challenge you to proof. I just spoke to the Commissioner for Education. She denies your claim. Provide proof, if you have any.” 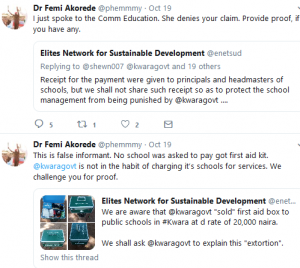 Surprised by the public denial of the state government about collecting N20,000 from schools for the box, ENetSuD eventually released a copy of the receipt issued to the schools after the payment. This receipt is being issued by a Lagos-based Albayan Global Resources Ltd who claims to be involved in Health, Safety and Environmental Services. Dr. Femi Akorede however made a U-turn after ENetSuD produced the receipt. He said that “the receipt was issued by a private organization, not KWSG. We stand by our position that the state government didn’t collect money from any school or its management for the kits”

Not satisfied with this response from the State Government, ENetSuD further said that “KWSG connived with Albayan Global Resources to collect N20,000 from the Public Schools in Kwara State. The denial by Kwara Government spokesman also suggests that he does not have full knowledge of the messes that are going on within the government he speaks for. The denial of the State Commissioner for Education also shopws that she is not sincere enough to disclose the truth about the abnormalities going on under her Ministry. We are aware that payment of N20,000 for this First Aid Box is being made by all public schools in the Sport Section of Ministry of Education. As we speak, some schools are still paying for this First Aid Box. How can KWSG be collecting N20,000 for First Aid Box? 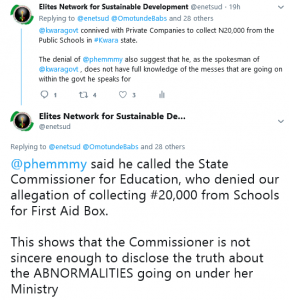 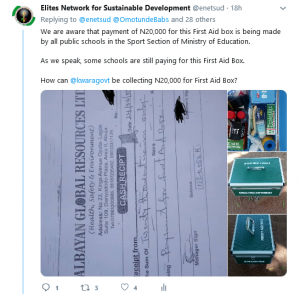 Immediately after the last tweet of ENetSuD calling for the state government to explain the allegation within 7 days and take appropriate disciplinary action against the State Commissioner for education, Dr. Femi Akorede contacted ENetSuD on phone and made another U-turn. He explained that “the Ministry noticed that Provision of First Aid Box is supposed to be made from the PTA levies collected by School management, but Principals are not making such provision after collecting the fees. So, what the Ministry did was to enforce the School compliance with the provision of the Box by ensuring that all schools make it available.”

However, ENetSuD is not satisfied with this explanation, as it has resolved to write the Kwara State Commissioner for Education to officially explain why schools are paying N20,000 in the Ministry before they are given the Kwara State Government-branded First Aid Box. ENetSuD has also resolved to take legal steps to ensure that the KWSG refunds all the money collected from schools if the explanation of the Commissioner of Education is not acceptable. 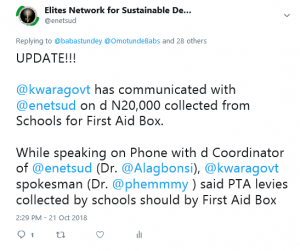 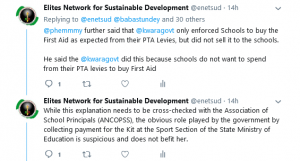 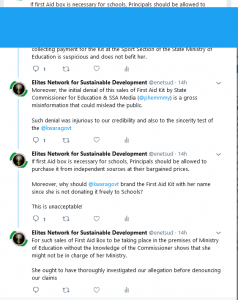