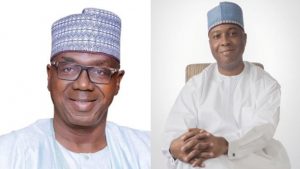 Elites Network for Sustainable Development (ENetSuD), a Kwara-based Civil Society Organization, has berated the Kwara State Ministry of Education over a perceived double-standard on government’s action as regards the provision of some instructional materials and other items to public schools in Kwara State. It will be recalled that ENetSuD had earlier lambasted the Ministry under the administration of former Governor Abdulfatah Ahmed over sales of KWSG-branded first aid box to public schools across the state (https://enetsud.org/2018/10/22/5436/).

ENetSuD recalled how KWSG, through a statement issued on 16th September, 2019 by the Press Secretary of the Kwara State Ministry of Education and Human Capital Development (Yakub K Aliagan), condemned the printing of Sen. Bukola Saraki picture on the instructional materials distributed as part of the 2017 and 2018 Constituency projects of the former Senator in public schools across Kwara Central. The KWSG also advised the former Senator to remove the pictures in the materials’ cover and return them to the Ministry for distribution. Even though the Constituency Office of the former Senator explained to ENetSuD the reasons for the late distribution, ENetSuD strongly condemns the act of keeping projects meant for the public without timely delivery to the beneficiaries, as ENetSuD has been engaging the office for a while to distribute the materials in its possession without an immediate action expected from the office.

ENetSuD was surprised to note that a scheme and record of work book produced by the Kwara State branch of All Nigeria Conference of Principals of Secondary Schools (ANCOPSS) was emblazoned with the photograph of Governor Abdulrahman Abdulrazaq and being sold to public schools. Even though the sale of the book is not wrong itself, the act of ANCOPSS emblazoning it with photograph of the Governor under the watch of the Supervising Ministry of Education who earlier condemned similar act is perceived as a double-standard that should be highly discouraged by all. How the Ministry will claim ignorance of the sales of this scheme of work emblazoned with the Governor’s photograph is not understood and needs further clarification.

ENetSuD wishes to remind the KWSG that the instructional materials rejected were constituency projects of Federal Government funded with multi-million naira taxpayers’ money, which should not be allowed to waste. Similar instructional materials that were capital projects (Sustainable Development Goals projects) have photograph of President Muhammadu Buhari and have already been distributed directly to the schools, serving the purpose of improving students’ access to education that they were meant for. ENetSuD consultation with the Director of Project of Sen. Bukola Saraki (Engr. Otukoko Ibrahim) on their next plan revealed that they do not have any plan to comply with the Ministry’s advice to change the cover and return the items to the Ministry. ENetSuD is not also certain that UBEC will pay any contractor for change of the cover emblazoned with the former Senator’s photograph. Thus, ENetSuD urges KWSG that distribution of the instructional materials to students across public schools in Kwara Central be allowed in order not to deprive them the opportunity to access quality education they are entitled to. ENetSuD had severally condemned the act of personalizing taxpayers’ money-funded projects to attract political gains and advises government at all levels to desist from such act, thus supporting the Governor’s call to stop personalizing projects with personal photographs.

The Governor’s directive to suspend and withdraw the sales of the scheme of work by ANCOPSS without his consent for inclusion of his photograph is commendable. However, ENetSuD urges KWSG to reconsider her position and allow the distribution and sales of the instructional materials and the scheme of work by Sen. Saraki’s office and AMCOPSS respectively to proceed, while taking all the necessary steps to forestall such from happening in the future. This plea is based on our concern for huge public funds spent on those instructional materials and PTA levies spent on the scheme of work. Finally, ENetSuD urges government at all levels to stop the practice of using public projects to promote individuals.